In celebration of Black History Month, Crimson wanted to highlight some awesome Black teens paving the way! The teens spotlighted below are trailblazers in the realms of STEM, entrepreneurship, debate, education, social justice, and so much more! Crimson Education highly values the importance of students using their own voices to spark change. The following students are not to be underestimated… they’re changing the world! Fascinated with the world beyond our own, Caleb Anderson has had a love and passion for outer space since he was a young boy. While many young people have unbound curiosity and a passion for their education, Caleb has taken his to another level. At just 12 years old, Caleb is already a sophomore in college and is completing courses in calculus, U.S. history, humanities, and macroeconomics, in hopes of one day becoming an aerospace engineer!

Caleb started learning American Sign Language at just a few weeks old, fractions at age 2, and passed first grade by the time he was 3. Caleb always felt different and faced social challenges as it seemed he was always 10 steps ahead of his peers. In efforts to continue thriving, Caleb’s mom helped him register for a dual enrollment program at Chattahoochee Technical College in Marietta where he’s earning his associate degree while getting his high school diploma. Caleb is doing very well in his dual enrollment program and one day hopes to work at NASA and/or SpaceX and develop flying cars. Go, Caleb! 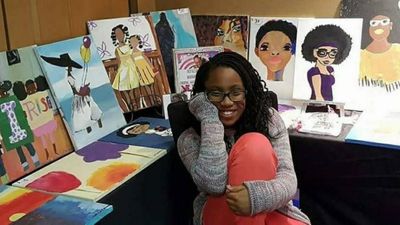 A self-proclaimed artist, author, illustrator, youth speaker, and motivator, Camryn is making big moves! Camryn’s efforts first broke headlines in 2018 when she was featured in major newspapers and publications for her community service efforts. At just 8, Camryn began to produce art (most commonly paintings) to sell to support children in Liberia. Since her debut, she has sold over 500 pieces of art ranging from $20 - $100 USD. Camryn decided to make an impact beyond her community in South Carolina and decided to donate some of the proceeds to orphans in Liberia that are unable to pay for their schooling. The rest of the proceeds are being used to save up for college. Go Camryn! To learn more about her work and service here, check out Camryn’s website. 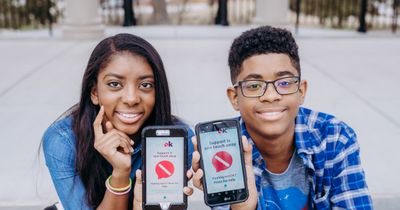 Siblings Charlie and Hannah launched an app called NotOK this past year that allows kids in crisis to page for help when in need. Inspiration for the app came from Hannah who suffers from Postural Orthostatic Tachycardia Syndrome (POTS). This form of dysautonomia causes those diagnosed with the syndrome to have an increased heart rate when someone is standing. Whenever Hannah, or any other child,  is feeling unwell, they are able to press the “notOK button” which sends a signal to her emergency contacts saying, “Hey, I’m not OK. Please call me, text me, or come find me.” The button also alerts the 5 preselected contacts with their current GPS location so that they can be found and supported. The Lucas siblings have just secured their first round of venture capital, and the future is bright! 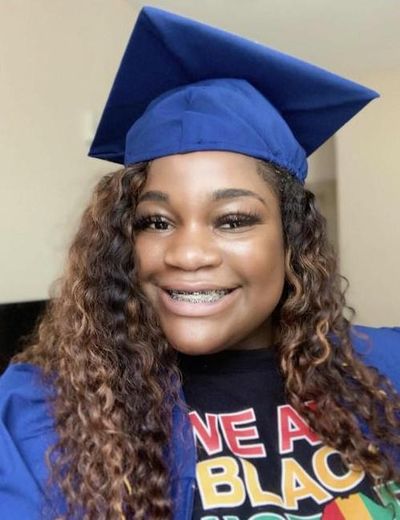 Emory graduated early from her online high school with a 3.7 GPA  after facing racism and discrimination in her traditional schooling environment. It was the switch to online schooling that allowed Emory to take hold of her education and move at a pace that suited her best. While racism and discrimination forced her to move to a new environment, Emory shares, “It actually was the dedication and my family that pushed me each day. . . I should thank the people that doubted me; that just made me work even harder.”

To make Emory’s experience even more special, her brother was later accepted to Clark Atlanta as well. Lorri Sadler, the Associate Vice President and Dean of Admissions shared her excitement about Emory’s acceptance: “We are honored that this exceptional young woman chose Clark Atlanta University to continue her studies and we look forward to supporting her through all of her endeavors. . . Ms. Pruitt has already accomplished so much in just 16 years and we know she’ll continue to build on her successes.”

Well-done, Emory! We can’t wait to see what you do next. 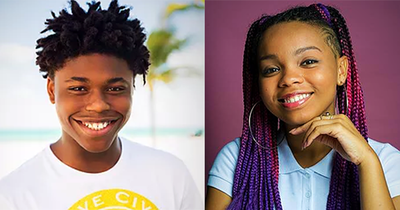 Essynce (also known as Ess) and AJ are two students you certainly want to be following. The two brainstormed and launched a national tour dedicated to inspiring, empowering, and educating thousands of students k-12! The goal of their Youth Empowerment Tour is to empower and inspire students through discussions around entrepreneurship, standing up to bullying, self-esteem, social issues in the Black community, and following their dreams!

Not only is AJ paving the way through the tour, but he is also an actor on the Showtime series The Chi and founded a nonprofit called “Building Bosses” that aims to educate and inspire the young Black community on the importance of entrepreneurship, leadership, and community service.

Ess is also one heck of an entrepreneur. In 2016, she was named Black Enterprise Teenpreneur of the Year. She has been applauded for her work as founder of Essynce Couture University, teaching leadership and entrepreneurship skills, as well as writing three books (that are now mandatory reading for several school district curriculums in New York and New Jersey!). 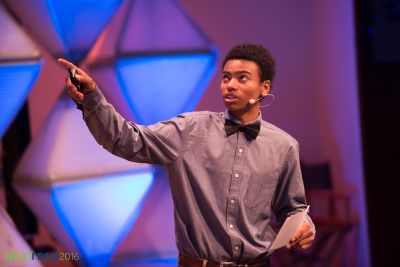 Seventeen year old, George, is an app developer that is working to implement technology as a solution to systemic issues like racism and violence. While at a hackathon in high school (George is now in college), he created “Connect the Dots,” a platform to support Black students navigate racism, specifically at predominantly white private schools. At only 16, George launched his own tech company called George Hofstetter Technologies Inc.

After the success of his first social support platform, George went on to develop a second app called “Cop Stop” which was designed to educate young people about best practices to stay safe when interacting with police and to protect people from police brutality. The Cop Stop app also allows users to film interactions with law enforcement in case they are stopped or pulled over serving as a viable alternative to body cameras.

George’s most recent project, “UP to CODE” is a free mobile curriculum for middle schoolers. With the aim of closing the digital divide, George has crossed both county and state borders and is thriving. The project is sponsored by Capital One Dev Exchange. Learn more about George’s current ventures here! 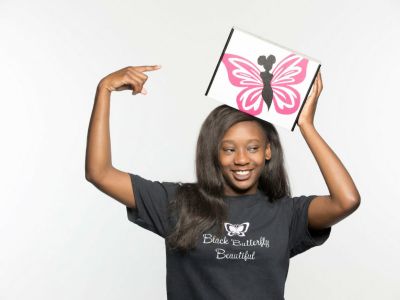 In 2017, Journi became inspired by her cousin’s lack of interest in reading and knew there was room to spark change. Shortly after, Journi created the Black Butterfly Beautiful box, a subscription box for young Black girls to become inspired and excited by reading. The monthly subscription delivers a box filled with a children’s book written by a Black author as well as other products made by Black entrepreneurs such as yummy treats and fun, new toys.

As the box began to grow more popular, Journi has expanded her brand and is now making a box for young Black boys as well called the Black Dragonfly box. Since her brand expansion, Journi has sold hundreds of boxes. Great work, Journi! 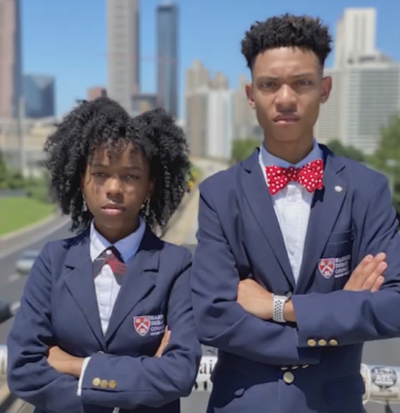 Also known as “The Atlanta Great Debaters”, Madison and Christian are strongly paving the way for other Black debaters, not only in the Atlanta area but across the nation and the world! Just this past year, Madison and Christian high school students and participants in the Harvard Diversity Project won first place at win at the prestigious Harvard Debate Competition. This is their third consecutive year earning this award. Madison is the first Black female student, and Christian is the youngest Black boy to win the competition. As a team, Madison and Christian beat students from over 25 countries around the world despite unprecedented obstacles and changes as a result of COVID-19; this is the first year the competition has been held virtually.

The Harvard Debate Competition has been known to help students land scholarships and acceptances to Ivy League schools and other top universities across the United States. Congratulations to Madison and Christian! We can’t wait to see where you grow next. After taking 21 AP courses, earning a 4.7 GPA, being at the top of the class for 7 years, and being named a Georgia scholar (yep! You read that all correctly!) Georgia student, Rawlin, was named the first black male valedictorian at his high school! Rawlin’s commitment to his education and future at college earned him 14 offers including Ohio State, Florida A&M University, Georgia Tech, Morehouse, Howard, Rose Hulman, Hampton, University of Georgia, North Carolina A&T, Tuskegee, and more, as well as over $1.3 million dollars in scholarships!

While Rawlin certainly had awesome options to choose from, he ended up accepting his offer to North Carolina A&T where he was offered a full academic scholarship. He will be studying mechanical engineering.

As most students know these days, it wasn’t just Rawlin’s academics that helped him score these offers. It was also his impressive extracurricular involvement that helped him stand out to admissions officers. Rawlin played two varsity sports, joined seven national honor societies, played in the school band, raps, and taught himself how to play the piano!

When asked his advice for other students pursuing higher education, Rawlin shared, “My advice to others is to always stay humble and do your best, and don’t get preoccupied with competing.” And it sounds like his method paid off! Congratulations, Rawlin!

Thanks for joining us for another Black History Month blog! While the month is almost over, we shall certainly continue to listen to and uplift Black voices as the year continues. With students like these, the future is bright. We can’t wait to see what unfolds in 2021! 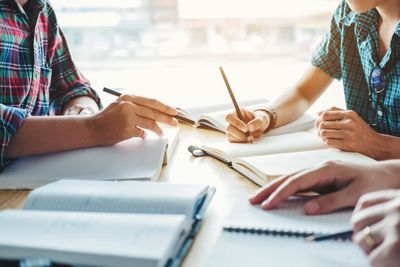 How to Turn an Idea Into a Portfolio of Leadership Projects 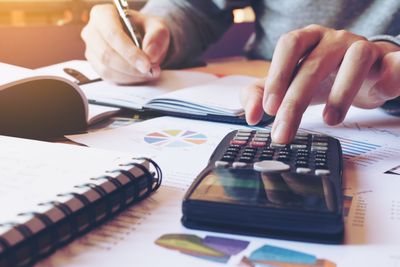 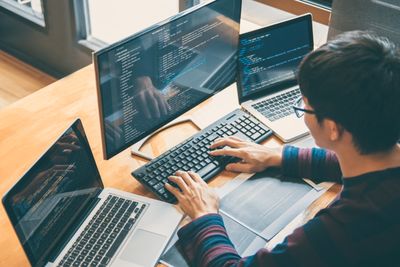 Coding Your Way to College: How Aspiring STEM Students Can Set Themselves Apart