In the age of the internet, the world has become more connected and digitally-driven than ever. New jobs have emerged from the technological revolution and with them, new college majors have been created to help young students delve into largely uncharted career paths.

Technology and the internet have changed the way we live, communicate and think in countless ways — and for the institutions educating our future leaders, this evolution has prompted them to adapt. Many new college courses have been created in recent years to embrace new professions that didn’t exist for previous generations. Here, we’ve outlined five majors that didn’t exist just 10 years ago.

Anyone who has watched Blade Runner (or read its inspiration Do Androids Dream of Electric Sheep) will be familiar with the societal fear that one day soon our technology will overtake us and unlock some facsimile of the sentience that we pride ourselves on. With this in mind, it’s unsurprising that some would choose to dedicate their careers to exploring the relationship between humans and machines — and should you choose to study at the University of Washington, Carnegie Mellon, Milwaukee School of Engineering or one of the few other colleges offering this major, you can do exactly that.

In the Human Computer Interaction (or HCI) course, students have the opportunity to explore user interface, software, design, usability, and the social and ethical dimensions of the technology that defines all our lives. The major encourages students to look for answers to questions such as ‘Why does giving Alexa a human voice make it more enjoyable to use?’ Although it’s a niche area that currently awards fewer than 1,300 degrees each year, it will only grow in relevance as time passes.

The pervasiveness of digital data has brought with it many remarkable innovations, but with it has come a type of vulnerability previous generations never would have imagined. Hacks, data leaks and breaches have the potential to put our most personal data at risk, take money from our bank account, allow criminals to assume our identities or even allow hacker organisations to launch massive cyber attacks and digital weapons. Cyber warfare is cited as one of the most prominent threats to the United States — so for anyone looking to be on the frontlines of this new form of warfare, this might be a major for you.

Courses in Cyber Security are becoming increasingly popular and are offered at institutions such as the University of Oxford, Boston University and Imperial College London. They provide students with a chance to develop skills in intelligence gathering, cyber-defence, risk management, network security and legal, ethical and professional practice. This could be an appealing major for anyone looking for a career in technology, whether you want to work as a network tester for private corporations or work with governments towards a greater degree of protection. Furthermore, given the increasing danger of cyber threats it is one that could see you very highly sought after.

If you love to code but don’t like the high-stakes nature of a job in cyber security, then the creativity of a job in game design might be just what you’re looking for. In the past 5 years online gaming has grown more than it has and its entire existence and is only increasing given the growth of streaming platforms such as Twitch, which make professional gaming a legitimate career option. Twitch itself currently has a net worth estimated at around $5 billion, with some streamers earning millions of dollars per year with many millions of followers. For Twitch and its competitors to exist, though, a steady stream of new and innovative games must fuel the market — and some colleges are responding to that need.

Courses in game design ensure its students are well versed in the technical aspects of programming and utilising all available technology as well as giving students the opportunity to develop their own identity as a designer and unlock their creative potential. A major in Game Design is an attractive choice for students who’ve been immersed in the industry their entire lives — which is more than you may expect, given that even the oldest gaming platforms such as Atari are still within living memory. Further, as virtual reality and 3D headsets become more prominent, it is clear that the industry is in store for continuous growth.

Journalism has long existed as a college major, but the recent wave of reporting done exclusively through blogs and social media has highlighted the need for dedicated education about these mediums, and some colleges have been quick to respond. Alongside the wavering presence of print journalism through magazines and newspapers, a degree in Online Journalism offers in-depth courses in cultivating digital content — whether for traditional media organisations or through the freelance work that more and more writers have embraced.

Students of this major also learn how to manage and track articles, practice SEO tactics, create online content, dabble in web design and even explore reporting information through non-written media such as videos or podcasting, both of which have become staples of the media landscape. At present, many people entering the industry do so with alternative qualifications and then learn on the go about how to create such content; meaning the chance to study and learn the tricks of the trade from accredited professionals is a leg-up that could benefit aspiring online journalists.

History and Sociology are universally respected fields that shed light on the human condition and explore how the past has shaped our society and us as individuals. They are not, however, in a position to fully explain the phenomena that characterizes the online world of memes and social media.

Understanding the impact of the virtual platforms and means of communication that have come to connect the vast majority of modern society has become crucial. As we become more immersed in our online lives, and those of the public figures that represent popular culture, a degree in Pop Culture Studies could take students into careers as bloggers, social media managers, digital marketers or a number of other jobs that require you to be in touch with the cutting edge trends of our culture.

Have any of these majors sparked your interest? Are you curious about how you to get started on the path to a career in a future-defining field? To learn more about how Crimson can help you identify the right school for your interests, and set you on the path to success, click the link below to schedule a free consultation with one of our academic advisors.

Want to get a head start on your journey to one of the best universities in the world? 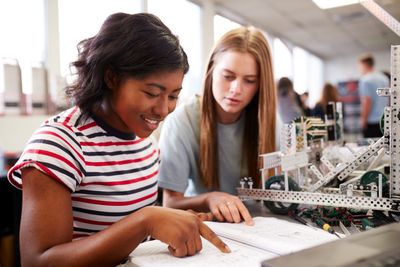