Best Student Cities in the World 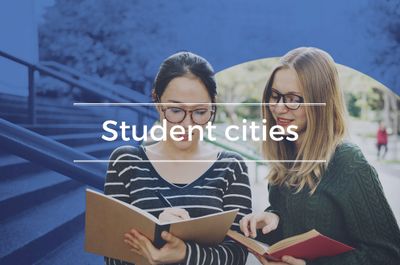 Student life is seriously off-the-hook. It's the first time in your life you only answer to yourself - and who doesn't like being the master of their own destiny?

Don’t get me wrong, it can be highly stressful with exams and assignment deadlines, as well as intensely awkward ‘meet your new classmate’ moments filled with uncomfortable silences and cringe-inducing small talk.

Mainly, though, being a student is awesome.

You spend most days with like-minded people, you get a healthy amount of holidays each year and - permitting you got organised and selected a good class schedule - your regular timetable is never too strenuous (until end of year exams and finals).

Plus, exchange programs let you explore the world and still learn. What’s not to love?

If you’re a current student who’s recently made the decision to study abroad: congratulations! This is a massive step towards an amazing journey that could well be one of the most formative experiences of your life.

To guide you on these amazing places to experience and learn, we've used QS Top Universities rankings of the top student cities around the world. The study considered top livability factors of each city, including their culture, affordability, desirability, student mix and employer activity, while considering their global university rankings too.

We’ve broken the list down into four key geographical locations to make it easier for you to choose: North America, Europe, Australia and Asia. Take a look at the list below and get your imagination running wild about what your student and campus life might be like in each of these cities:

Having sat on top the list of Best Student Cities for the last four years, it’s no wonder Paris is ranked so highly again this year, coming in at number two.

According to QS Top universities, Paris is home to 18 universities and comfortably lays claim to more world-leading institutions than almost any city on the planet – with the exception of Seoul (also 18). The highest ranked university in Paris is Ecole Normale Supérieure, ranked at number 33.

Does Paris really need a justification as one of the best student cities? Learn and practice French, eat the world's best croissants, study with the spirit of Voltaire and Rousseau at the Bibliotheque Sante-Genevieve and most importantly, be in uh, PARIS?!

A main influence as to why London is ranked so highly is due to the density of high-quality universities on offer within only a few kilometres of the city centre.

Additionally, the city ranks highly for desirability among students around the world. The two highest-ranked universities in London are University College London (UCL) and Imperial College London, which rank 7th and 9th respectively.

London is known for being expensive, however the city is rampant with student discounts, from nightclubs to transport, making it more affordable for you to study there.

But the real clincher is the city's globalised nature. London has the power to connect people from all walks of life, plus it's home to several powerhouse businesses, such as HSBC, BSkyB, Penguin and hundreds more.

Two German cities are boosted to the top standings of student cities due to their incomparable affordability.

They are: Berlin, which was awarded the highest score for affordability and Munich, second. This definitely has something to do with the AMAZING fact that no tuition fees are charged for undergraduate students at public universities in Germany, regardless of nationality.

That’s right, NO tuition fees. Zero. Regardless of nationality. Conditions apply, obviously, but how good is that!?

In addition to affordability, the two German cities also have great art and cultural scenes. Berlin has a rich history of famous musicians and artists moving to the capital to discover new avenues for their art.

Munich, on the otherhand, is the home of Oktoberfest. So we're talking bier halles, bratwurst, and schnitzels (yes, please!). The city is also known as the beer capital of the world, which perhaps explains why it's the perfect city for students!

Just remember, German student visas limit the amount you can work and you'll probably need a good grasp of German to realise the full benefits of studying in the country.

Oh, and let's not forget the country is famous for it's bureaucracy - so expect paperwork, from the foreigners' office to the university and everywhere in between.

While the US is one of the two big players in the world for high quality education (along with the UK) because of the Ivy League colleges and liberal arts degrees, surprisingly, it’s Canada that makes the biggest impact on the list of best student cities in the world.

Filled with proud French-speaking Canadiens, Montreal is number one on the list of student cities, knocking Paris off the top spot where it'd been resting on it's baguettes for the past four years.

If you're looking to study abroad, Montreal is considered a bustling melting pot of culture, with a combination of music, food, art and nightlife.

The highest ranked and most popular university in Montreal is McGill University, which sits at number 30 in the world on the QS world university rankings.

Montreal is made for students - particularly international ones.

No matter where you turn, you'll bump into someone studying. It's a hub of multiculturalism and has been for centuries. Whether you love food, partying, music, history, culture or sport - this city has it all. But locals are particularly fond of their partying reputation... so prepare for some late night excursions into the clubbing world.

Vancouver is the second-highest ranked Canadian city, coming in at number 10 on the list, with Toronto following immediately at equal 11th.

The highest-ranked university in Vancouver is the University of British Columbia (45th). The city’s other ranked institution, Simon Fraser University, offers a real slice of Canadian life beyond the city limits with the location of its main campus situated in the middle of the Burnaby Mountain Conservation Area. Ah, nature.

Vancouver is the diverse, chill cousin of Toronto, with lots of national parks, whale watching and expat culture to experience. People who move to Vancouver for six months usually end up living there forever. It's that kind of place.

As an aside, while Toronto is ranked lower than Vancouver and Montreal, it received the highest desirability score of any city, of all locations. Toronto is one of the hottest cities right now. So if you want to know what it is, you'll probably find out in the 6ix.

Boston is the lone US city in the top ten for best student cities and it's easy to see why, hosting heavy-hitting colleges Harvard and MIT, which are ranked 1st and 3rd in the world, respectively.

Boston is slathered in colleges and is known as America's college town. It's also a hive of cultural activity with world-famous comedians, such as Louis CK, Conan O'Brien and Amy Poehler, hailing from the city while influential bands, including Aerosmith, Pixies and working-class heroes The Dropkick Murphys, kicking their first jams in Beantown.

The next highest US student city is New York ranked 19th. Who doesn't want to study in New York? Do we really need to explain why you have to go there?

If you get the opportunity. Study in New York. 'nuff said.

The reason why there is such a scarce amount of US cities on the list is likely due to affordability, with many US colleges costing upwards of $USD40,000 per year to attend.

However, there are many ways to bypass or reduce these payments, such as securing a scholarship or gaining admission into a need-blind admission school.

Both MIT and Harvard operate need-blind admission policies for all applicants, including international students, and generous financial aid packages and is why they managed to rank so highly on the list.

South Korea’s capital, Seoul, is the highest ranked Asian city for students coming in at number 4. Seoul’s high ranking has a lot to do with the fact that it has 18 universities featured in the 2016-2017 QS World University Rankings.

According to many, Seoul is fast-becoming a must-experience destination.

Not only is Seoul's economy exploding, it's also a cultural hub - particularly because of the partying. Korean Upperclassmen (seniors) expect you to party, so bring your drinking (and dancing) shoes.

Hong Kong is one of the world’s most populated cities and leading financial districts, not to mention a meeting place of cultures.

Studying as an international student in Hong Kong is a far cry from the quaint student-life of London or Paris. Given Hong Kong's large population, life is fast-paced and chaotic.

If you're hoping for a quiet time studying abroad, Hong Kong might not be for you. However, the city scores well for both university rankings and employer activity.

The average fees for an international student is roughly US$15,700, meaning, when you compare it to places like the US or UK, it's relatively cheap.

The city of Singapore comes in at number 14 in the world on QS Best Student Cities ranking 2017. Like many of the other Asian cities, Singapore has a high population, which currently sits at around 5,600,000. The average tuition fees for international students in Singapore is approximately US$12,500, which is extremely affordable!

Another element to consider when looking at international cities is the weather.

Being located right next to the equator, Singapore has hot temperatures all year round! I hope you like humidity.

What's more, unlike other asian cities, Singapore is surrounded by dense, tropical nature, giving you an avenue to escape the hustle and bustle of the big city.

Tokyo, ranked number 7 in the world, is a metropolis with a population of over 13.6 million people. Tokyo has 13 internationally ranked universities yet still has one of the lowest proportionate student populations of any city in the QS Best Student Cities index (QS Top University). The highest ranked university in Tokyo is The University of Tokyo sitting at 34 on the list.

Besides, Tokyo really values international students, both in the classroom and as job prospects. You'll feel welcomed and appreciated if you decide to study in Japan's premier city.

There are some fun, exciting and beautiful cities to study in all over the world, each with their own style, culture and way of living. Yet no matter where in the world you choose to study, being an international student and learning about a new culture while making new friends may just be the best time of your life! Choose wisely when deciding where to study and make the most of it while you're there! So what are you waitin' for? Go out and experience the world!

Ever wanted to immerse yourself in a foreign culture while maximising your education? You can transform your tertiary education into an international experience by studying abroad. No matter your skill level, we'll work with you to get you to where you want to be. Let's find a time to talk about your options - contact us today!